Heroes Of Our Time

What were these secret techniques and how did they work?

RAF No.100 group brought together a collaboration of groups and people who had the required skills to enhance and develop electronic warfare in order to try and reduce the great losses being suffered at that time.  The nature of the work promoted great secrecy.

Some examples are below, as yet this is not an exhaustive list and we will add to it over time:-

One of the most simple techniques devised was something codenamed ‘Window’.  Something the Germans already knew about but had held off using themselves.   In layman’s terms they were like strips of aluminium which confused radars when dropped from planes, which in turn resulted in confusing and obscured results in number of attacking planes and positions.

Window was first used during night attacks on Hamburg on 24/25th July 1943 and became routine on every flight until the end of the war.

This was the technique of using German speaking RAF operators to transmit confusing and false commands to German fighters, helping to avoid counter attacks.

The large aerials shown on top of the Lancaster's fuselage below indicates that it was carrying ABC. 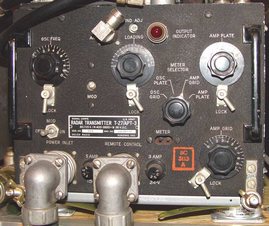 Technique of using radio transmissions from bombers which in turn drowned out radio communications between German fighters and their controllers. Tinsel itself was thought to be one of the largest devices carried.  Tall masts and wire aerials were mounted on the top of the fuselage of the aircraft.

R1155 Receiver on top of T1154 Transmitter, used for Tinsel pictured below. 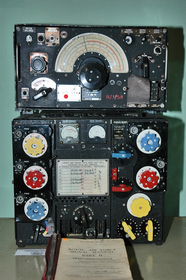 Jostle transmitter with its pressurised casing removed is shown in image below. 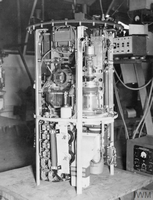 Jostle transmitters being lowered into their loading pit. The receiving aircraft was positioned over the pit so that the device could be hoisted into its bomb-bay.

Located under the fuselage of heavy bombers it was a ground mapping radar with the output being displayed on a cathode ray screen.  This helped identify areas of water or buildings.

Image below shows the cathode ray tube Plan Position Indicator (PPI) and controls of an H2S radar system being operated by the navigator in a Lancaster bomber, circa 1944. 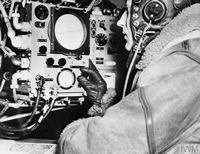 An Avro Lancaster of No 1 Group, Bomber Command, silhouetted against flares, smoke and explosions during the attack on Hamburg, Germany, by aircraft of Nos 1, 5 and 8 Groups on the night of 30/31 January 1943. This raid was the first occasion on which H2S centimetric radar was used by the Pathfinder aircraft to navigate the force to the target. 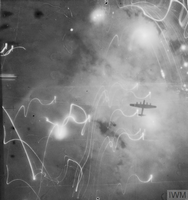 Many other techniques were used such as Bagful, Blonde, Coalscuttle, Serrate, Perfecto, Fishpond, Monica, Piperack, Boozer.

More details of these can be found on the website link below:-